Let us count the ways he was lucky.

When E. J. Baldwin left for an ocean voyage, he instructed his stock broker to sell all the shares in a particular silver mine that seemed ready to collapse. In those days, you needed to have the paper stock certificates to make a transaction, and Baldwin had forgotten to give his broker the key to his safe. Alas, the sale did not occur, but lo and behold, the mine suddenly uncovered a huge silver lode and Lucky Baldwin returned a much richer man.

Later in life, he founded the Santa Anita Racetrack and had extraordinary success with his own horses (no evidence of cheating but he did use custom horse shoes).

When a banking house went broke, Baldwin was forced to accept a tract of land that was at the time worthless. Eventually the railroad chose that path for extension and he made a killing.

He lent a ring he received as a gift from the Japanese foreign counsel to a stockbroker for a mere six months in exchange for 500 shares of a lackluster silver mine that suddenly struck the mother lode and turned him millions in profit. 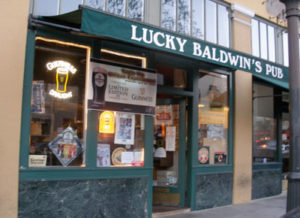 In Pasadena, California. One of many drinking establishment named after Lucky Baldwin

But the man was lucky for another reason. As stated on the cover of his biographer’s book, Baldwin was known as a Notorious Libertine and Womanizer. He was lucky he died a natural death at the ripe old age of 80. The women were always young and some were married. At the age off 55, Lucky’s love affair with 16-year-old paramour Louise Perkins created nationwide headlines when she sued him for breach of marriage promise, and collected a huge court award. 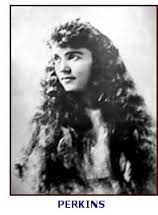 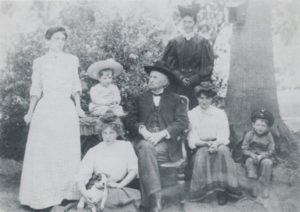 Not that there were no attempts on his life for such indiscretions. One of the various women accusing Lucky of breach of promise shot and wounded him in 1883 inside his luxury San Francisco Baldwin Hotel. He also narrowly escaped death in a San Francisco courtroom in 1896 while being sued for tricking a lady into signing a false marriage certificate so he could exercise his conjugal rights. As she was on the witness stand, her sister walked up behind Baldwin and fired a pistol at him, grazing his skull. 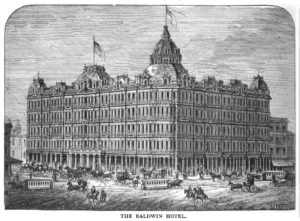 While financially tightfisted in his business dealings, he led a flamboyant lifestyle, especially with the fairer sex. One contemporary commented, “Baldwin didn’t run after women; they ran after him.” And they usually caught Lucky, a notoriously slow runner when pursued by young ladies. A biographer stated such attention was evident early in his life: “The manner in which they hurled themselves upon him, or upon his buckskin poke of gold in those early days of his notorious riches was but a feeble forecast of the years to come.”

Baldwin’s matrimonial ventures periodically created sensations. He was married four times, the first three ending in divorce. In all, he was sued by four women for breach of promise. His stature as a celebrity was such that at age 56, when he married 20-year-old Lilly Bennett in San Francisco, the wedding drew coast-to-coast press coverage. It was at that time 16-year-old Louise Perkins won her court battle.

Some guys have all the the luck. 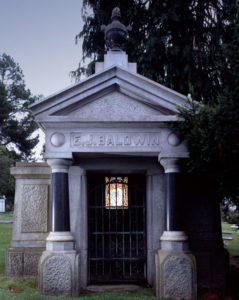 Baldwin mausoleum at Cypress Lawn adorned with a stained glass angel. The angel should have her tongue in her cheek.