The modern trend of cremation began when the Queen’s personal surgeon created the Cremation Society of England. Germans built a substantial crematorium in 1878. Two years earlier, Dr. Francis Julius Le Moyne, a noted abolitionist and free thinker, had constructed the first American crematory in Pennsylvania, where its opening became national news. The major impetus for this practice was the increasingly crowded and deteriorating conditions in urban graveyards. Although the rural cemetery movement was gaining momentum and park-like memorial grounds were being built in some cities, there were people who believed that any earth burial presented health hazards for those who lived near cemeteries.

Always a forward looking place, many San Franciscans were promoting the idea of cremation as early as the 1870s. Resistance came mainly from homeowners who opposed any incineration with the city limits. At the time, the closest crematory was in Los Angeles.

With the opening of Cypress Lawn Cemetery in 1892, a group of leading city residents formed the San Francisco Cremation Company and contracted with the cemetery – located in Colma, outside San Francisco’s jurisdiction – to erect the first crematory in Northern California. Designed by a leading architectural firm, it was constructed in the form of a Grecian temple surmounted by a dome and ornamented with classic pillars, and came with an adjoining chapel.  The structure remained virtually untouched in the great 1906 earthquake, but succumbed to serious damage in a 1957 trembler and was subsequently torn down. 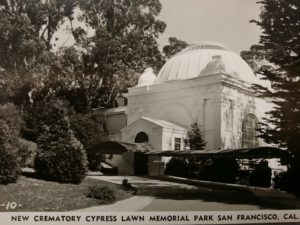 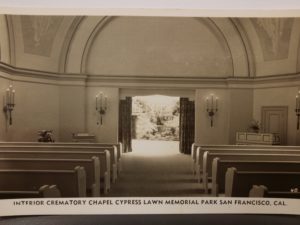 In 1937 a crematory was installed behind and adjoining Noble Chapel, replicating the chapel-crematory funeral ensemble. When that 1893 Chapel underwent a full restoration in 2013, the crematory, damaged in a fire, was completely reconstructed with the latest, state-of-the equipment and a modern witness room. 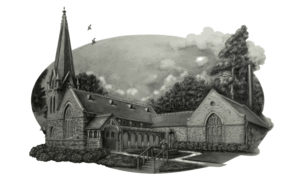 The original Columbarium at Cypress Lawn dates from 1895, and still stands. There was room for 1,000 crematory receptacles. 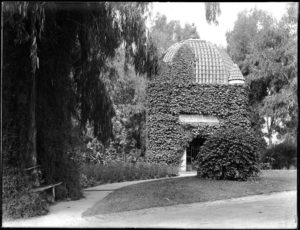 By the 1920s, cremation was an option for an increasing number of California families. The last great project of Bernard Cahill was the proposed 20,000-square-foot Lakeside Columbarium just south of the grand entrance gateway. Construction began in 1927. Then came the Depression and work on the Mediterranean style building abruptly stopped in 1930. Fortunately, the ground floor was finished. It featured twenty-nine varieties of imported marble, elaborate copper fitted closed and open faced niches, opalescent glass skylights, and a dozen private rooms facing the lake.  A small fourth floor, containing rows of more modest niches, was also ready to be populated. The Lakeside original master plan had called for 10,000 niches, which would have made it the world’s largest columbarium. 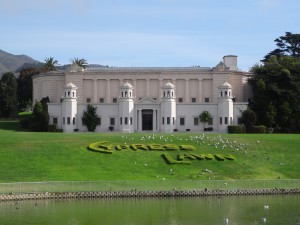 The growing popularity of cremation quickly spurred additional columbarium space, which was provided in the West Campus Mausoleum begun by renowned architect Bernard S. Cahill in 1906. Expansion on that sprawling mausoleum complex continued into the 1960s and contains cremated remains window front niches, many of which were added after 2000. In addition, created remains can be place in full body crypts. 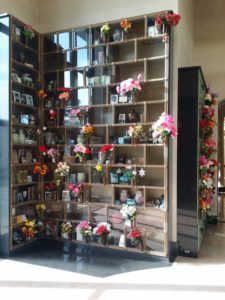 In 2010, Cypress Lawn launched the Cremation Society. Cypress Lawn Cemetery Association President and CEO Ken Varner envisions it as a restoration of the original early twentieth century Cremation Company of San Francisco with which Cypress Lawn had entered into partnership. In the intervening years, the range of choice for cremated remains has greatly expanded. From scattering at sea or air to placement in niches and in the ground, plus other alternatives, the Cypress Lawn Cremation Society offers unlimited options for a final resting place as well as the assurance to all members that their final wishes are faithfully carried out in our own crematory facilities and by our own staff.