Cypress Lawn History: Believe It Or Not. Those Magnificent Mausoleums

The very first mausoleum to grace Cypress Lawn belonged to Andrew Jackson Pope, the lumber baron. He died in 1870. Cypress Lawn opened in 1892. At first sight, this baffles people. 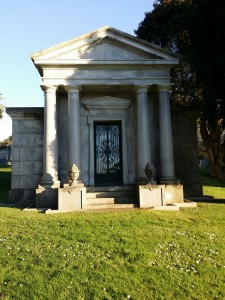 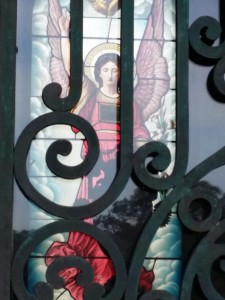 Like many others, such as James Flood, the family moved the structure here when it became clear San Francisco would likely forbid any new burials in the City and order the eviction of those that already were. 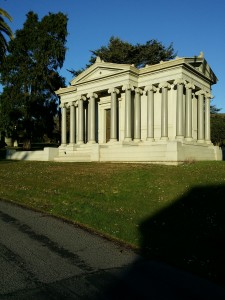 As befits the mighty fortune of James Flood, his Mausoleum is the largest private structure at Cypress Lawn

There are currently 87 private family mausoleums at Cypress Lawn.

In 1900, the average mausoleum (not counting land) cost about $75,000-$100,000, a princely sum in those days. Few were built after 1920. In 1987, Lydia Kalmanovitz, wife of beer baron wholesaler Paul Kalmanovitz, spent $2.5 million for their large mausoleum just inside the granite entrance gate to the East Gardens of Cypress Lawn. You cannot build a such a magnificent structure and put it on a postage size piece of property, so Lydia paid another $2.5 million for the land. All that barely put a dent in the $228 million Paul left to Lydia. The pair had no children. Elegantly furnished and meticulously cared for through a private endowment, the mausoleum also contains cenotaphs – an empty tomb or a monument erected in honor of one whose remains are elsewhere – recognizing the couple’s faithful pets, Lady Kitty, a feline, and German shepherds Pete and Marsha. California law does not permit animals to be buried with people. 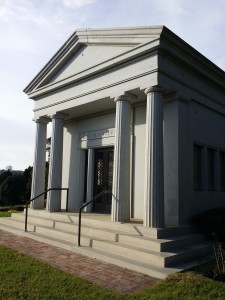 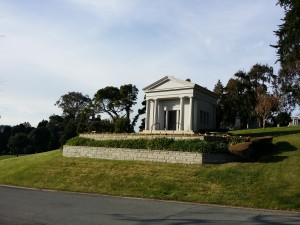 Expenses for memorials and land will only go up. So if your plans are a Grecian Temple or a modest testimonial, making advance arrangements now will save you money in the long run.

4 thoughts on “Cypress Lawn History: Believe It Or Not. Those Magnificent Mausoleums”