PART 2 of the Great 1918 Pandemic in San Francisco: “To Mask Or Not To Mask, That Is The Question.” 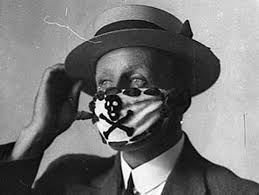 “Wear a Mask and Save Your Life! A Mask is 99% Proof Against Influenza.” ~ Mayor “Sunny” Jim Rolph’s official proclamation to the citizens of San Francisco

<> Police practice aggressive enforcement, especially in the early days. Officers are on the look-out for those who ignore the rule, but also for those who do not properly comply. On October 27, 110 mask violators are cited. The next day, 50. On November 2, a record 175 are found in non-compliance. 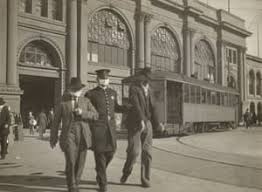 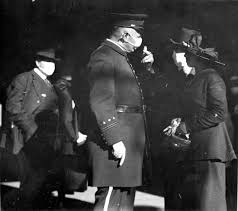 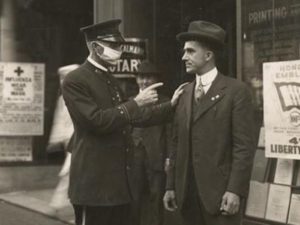 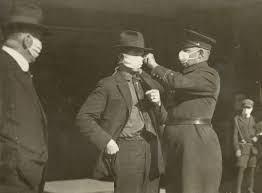 Most scofflaws are simply fined, but enough are put in jail, some for 30 days, that the Chief of Police openly worries about available space as courts work longer hours to clear the cases. “John Raggi, arrested on Columbus Avenue, said he did not wear a mask because he did not believe in masks or ordinances, or even jail,” The San Francisco Chronicle reported. “He does believe in jails now, for he is in one.”

The most dramatic and violent incident occurs on October 28. 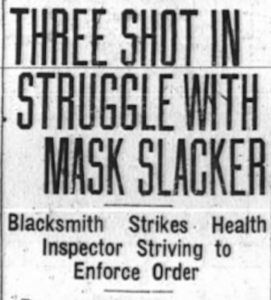 A health department inspector runs across a 62-year man standing on a corner of Powell Street waving his arms and urging everyone to tear off their masks. “They are bunk!” he yells to the crowd gathering around him. When the health inspector escorts the troublemaker to a drug store to purchase a mask, he suddenly beats the inspector with a bag of silver dollars, knocking him to the ground. The fallen officer then discharges four rounds, hitting his assailant and two bystanders. None of the injuries prove life threatening. The officer is charged with assault with a deadly weapon; the protester gets away with “disturbing the peace.” There is no mention if he is able to retrieve his sack-of-silver weapon. 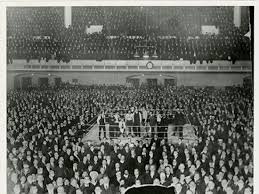 <> At a crowd-filled San Francisco Civic Center boxing match, a police photographer captures images of several Supervisors, a Congressman, a Judge, a Navy rear-admiral, the city’s Health Officer, Dr. Hassler, and even Mayor Rolph, all without masks. The good doctor has one but it is around his neck. The excuse: he has been enjoying his pipe. He pays a $5 fine ($50 today); the Mayor, when shown the picture a few days later, graciously forks over a hefty $50 ($500). From a photograph of the event, it appears there were hundreds, even thousands, of mask “slackers,” a term carried over from World War I (ended in November, 1918) where those who do not support the domestic sacrifices of the war effort are labeled “slackers.”

<> The Chronicle has endorsed the mask, but by mid-November it editorializes: “The Epidemic has Passed — And the Public Will Rejoice When Allowed Once More to Breathe Freely.” Politicians eagerly declare victory, as the city reopens with packed theaters and bars. Red Cross President John Britton gathers volunteer workers to a crowded luncheon just hours after the order is lifted, declaring: “It is a great privilege to meet this indomitable band of workers today, and to see each of you exposing your complexion unmasked.” Complexions will again be covered in less than three weeks.

<>  One of the most common reasons for either not wearing a mask or deploying it incorrectly is in order to smoke a pipe, cigar, or the novel cigarette.  Some devise holes in their masks to enjoy the habit. 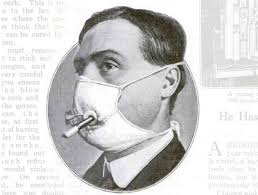 <> Commuters arriving from the ferries to San Francisco are notorious for mask violations. Many are smokers who dislike the inconvenience. The police are on it. Most of the violators receive only a stern reprimand, and a promise to be more vigilant in the future. To ensure that there could be no excuses, the Red Cross sets up a stand at the ferry terminal to sell masks.

<>  A major issue is spitting. 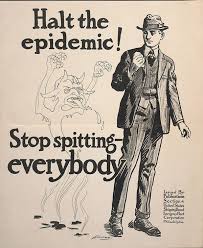 Back in the day, spitting was common place, enabled by the wide use of chewing tobacco. Every bar as well as upper crust men’s clubs provide “spittoons” throughout the nineteenth and early twentieth centuries. During the Pandemic, more are added;  in some cases, appropriate signs are posted. Spitting on city public transportation is expressly forbidden during the virus.

<> Some cities with mask ordinances publish the name of scofflaws in the newspaper. San Francisco does not.

<> Surgical masks in those days are made of gauze, a porous material providing less protection than modern ones. Not surprising, many people’s flu masks are gauze. Officials are more concerned with general than specific compliance. To encourage fashion-conscious women to don masks, city officials suggest chiffon veils. The yashmak – a Turkish veil worn by Muslim women – makes a brief appearance. The San Francisco Chronicle reports seeing some wearing “fearsome looking machines like extended muzzles.” 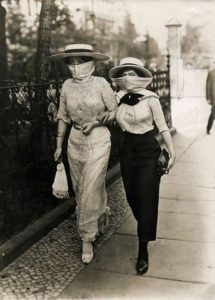 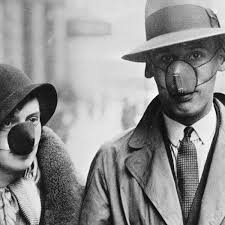 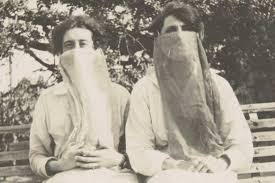 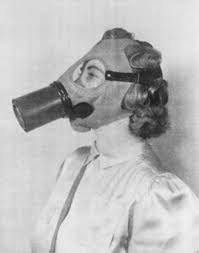 <> In a reversal of today’s pandemic response, Los Angeles is more diligent and vigilant than San Francisco. In the south, strict social distancing and face covering are mandated before San Francisco does, and its measures stay in place for weeks longer. There are less per capita hospitalizations and deaths in Los Angeles.

<> Although there are complaints during the initial mask-wearing edict, the ordinance in early January, 1919 galvanizes more serious opposition. The Anti-Mask League emerges in full force. 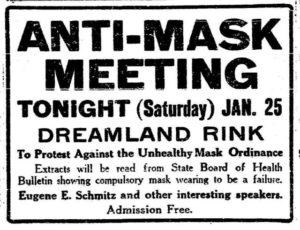 Members include physicians, prominent civil libertarians, and one member of the Board of Supervisors. Eugene Schmitz mentioned in the advertisement here is a former Mayor. Between  4,000–5,000 citizens attend the public meeting on January 25, 1919. Some want to collect petition signatures to end the mask requirement. Others  advocate for a recall of the city health officer, Dr. Hassler. There are those who demand the resignation of the Mayor if he does not repeal the ordinance. The president of the League is suffragette, attorney, and labor rights activist Mrs. E.C. Harrington, a fierce critic of the Mayor. The debate is heated. Some objections to the ordinance are based on questions of scientific data. Others consider the requirement to infringe on civil liberties. On January 27, the group presents a petition, signed by Harrington as president, to the city’s Board of Supervisors, requesting repeal of the mask ordinance. Newspapers across the nation and the world take note of the League; it is unusual because of its size, prominent members, and degree of organization. San Francisco lifts the mask requirement effective February 1, 1919 on the recommendation of the Board of Health.

<> Dr. William Hassler, Chief of San Francisco’s Board of Health, is an early advocate of taking strong preventative measures, especially masks, against the flu. However, before the first case,  he predicts that the influenza would never reach San Francisco.

<> In the current pandemic, although there is public shaming and heated exchanges among San Francisco residents, there are, as far as I know, no official citations or arrests for mask violations.