Called “Hallidie’s Folly,” Andrew Hallidie certainly had the last laugh…all the way up the hill and to the bank.

San Francisco is built on a terrain of steep hills. In its early days the only way for people and materials to conquer those inclines was by horse. This kept many prominent locations sparsely inhabited and could inflict abuse on the animals. Hallidie’s love of horses was a motivating factor in the invention of the cable car. 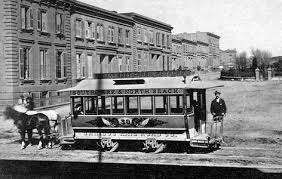 Before 1873, the horse trolley railroad was the only mode of public transportation in San Francisco

He wrote in a report to the Mechanics’ Institute:

“I was largely induced to think over the matter from seeing the difficulty and pain the horses experienced in hauling the trams up Jackson Street, from Kearny to Stockton Street, on which street four or five horses were needed for the purpose–the driving being accompanied by the free use of the whip and voice, and occasionally by the horses falling and being dragged down the hill on their sides, by the car loaded with passengers sliding on its track. With the view of obviating these difficulties, and for the purpose of reducing the expense of operating street railways (tram-roads), I devoted all my available time to the careful consideration of the subject.”

Andrew Hallidie arrived in San Francisco with his father to find gold riches. By 1853, his father left without success but young Andrew stayed and gained prominence as a surveyor and bridge builder. In 1856, Hallidie was consulted over the rapid rate of wear on the ropes used to lower cars of rock from the mine to the mill. Hallidie improvised machinery to make a replacement wire rope that lasted two years, and in the process began wire rope manufacture in California where he quickly prospered due to demand from the Comstock silver mines. 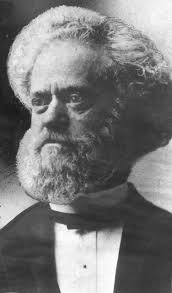 The development of wire cable led Hallidie to perfect the first cable car, which descended the Clay Street Hill at 5:00 am on August 2nd, 1873. Hallidie embarked at at this hour so no one would get injured in case the debut failed and the trolley plummeted out of control.  The gripman he hired peered down the steep slope from Jones and refused to operate the machinery, so Hallidie grabbed the grip himself and negotiated the car smoothly down the hill and back up again without any problems. 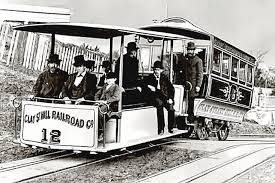 His Clay Street Line started regular service on September 1, 1873 and was an immediate financial success. In addition, Hallidie’s patents on the cable car design were stringently enforced on cable car promoters around the world, which made him a rich man. Without the cable car, there would have been no Nob Hill mansions until many years later. 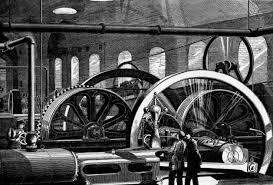 Inside the cable car power station

His talent and success in business did not translate to politics. He was a candidate for the California State Senate and in 1875 ran San Francisco mayor, but defeated both times. Hallidie died in 1900 at the age of 65 at his San Francisco residence and buried at the city’s premiere Laurel Hill Cemetery. In the 1930s, when that became the final cemetery to be removed from San Francisco, his wife had been long deceased and couple never had children. Laurel Hill urged families and friends to retrieve their loved ones’ memorials and remains, but no one came forth for Hallidie, so he and his wife were reinterred in Pioneer Mound at Cypress Lawn. The 35,000 Laurel Hill unclaimed remains there are buried in individual containers under a grass covered park without personal memorialization. However, the location of any individual at the Mound can be determined by consulting the cemetery records. 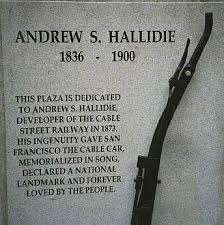 In San Francisco, Hallidie Plaza near the Powell and Market Street cable car turntable and the Hallidie Building in the financial district are named after him.

2 thoughts on “Resting at Cypress Lawn: The Genius Who Conquered San Francisco’s Hills”