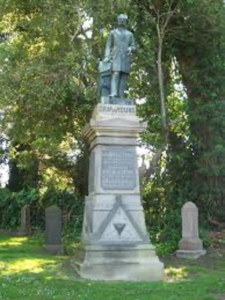 Charles de Young’s life-sized bronze statue is the only such memorial at Cypress Lawn.

It was commissioned by his brother, Michael de Young, at the time of Charles’ untimely death by assassination at age 35. Michael himself would survive an assassination attempt four years later.

The monument was transferred to Cypress Lawn in 1940 from the Oddfellows Cemetery in San Francisco.

The de Young brothers published The San Francisco Chronicle. The newspaper was not afraid of — and even courted — controversy as it provocatively attacked public figures regarded as unworthy or corrupt. Charles had a reputation as aggressive and short-tempered and was involved in frequent altercations. After he denounced a local judge in 1874, they met for a public duel on California Street. Neither was a decent shot; the two rounds fired by each man missed their targets.

Charles’ obituary in The New York Times six years later stated: “He was proud of the notoriety he had obtained, and proud of the personal danger, as a legitimate element of that notoriety.” 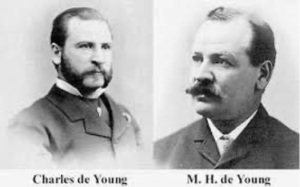 Is there a greater insult than to call your mother a ‘whoremonger,’ i.e. brothel keeper? To add insult to injury, you are labeled a ‘bastard,’ another slander on your mother.

Charles was tangling with the largest minister in the city — both in weight and congregation size — who was running for mayor in 1880 against a candidate Charles backed.

When The Chronicle accused Isaac Smith Kalloch of adultery, he fired back with those fighting-word epithets against Charles. Furious, Charles concocted a dastardly plan: Enlist a youngster to entice an unsuspecting Kalloch to a coach to speak to a “young lady,” whereupon Charles ambushed his adversary at point-blank range. The reverend — who had plenty of natural insulation to stop a bullet from reaching his vital organs —survived and went on to win the election. 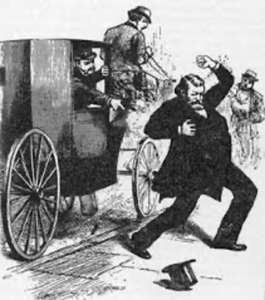 In this drama, the pen was not mightier than the sword. Released on bail, Charles soon confronted his karma one night when the reverend’s son, full of liquid courage, marched into The Chronicle offices and shot him dead at his desk. There was a lavish San Francisco funeral procession as a jury found the reverend’s son acted under duress. He was acquitted, sparking public outrage, which was mild compared to the editorial outrage.

• In 1884, Michael de Young began a series of “anti-corruption” articles on Claus Spreckels, the “Sugar King,” which accused him of using slave labor on his Hawaii plantations and bilking stockholders. His son, Adolph Spreckels, had had quite enough. In venerable San Francisco tradition, he aimed to assassinate the editor, but his aim was off. Entering The Chronicle offices, Adolph managed to wing him in the elbow and shoulder and would have dispatched his adversary with a third shot, had it not been slowed by a bunch of children’s books Michael happened to be clutching prior to the fracas. In a frantic chaos of scuffles with employees, Adolph was shot and subdued. Everyone survived. In venerable San Francisco tradition, the aggrieved assailant was acquitted by a jury.

“Those de Young girls are nice, but we’ve been never been close since my husband shot their father.” ~ Alma Spreckels, circa 1925, the elderly wife of Adolph Spreckels, speaking of the daughters of Michael de Young.

• Michael founded and funded the acclaimed San Francisco de Young Museum in 1895. Ironically, its only rival in the city was the acclaimed Legion of Honor, which was founded and funded by Adolph Spreckels in 1924. Today, they are equal parts of the Fine Arts Museum of San Francisco, a collaboration that would have been unthinkable in the old days.