Charles Crocker was one of the “Big Four” who built the transcontinental railroad. His eldest son, Charles Frederick Crocker, served as vice president of the Southern Pacific Railroad and president of the San Joaquin and Sierra Nevada Railroad. He died at 42 of Bright’s Disease, a kidney ailment that today would be better managed to avoid premature death. 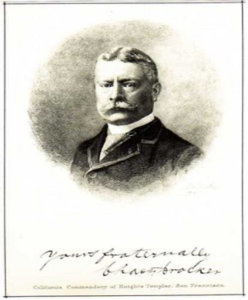 His mausoleum is one of the great treasures of Cypress Lawn, designed by renowned architect A. Page Brown, best known for the San Francisco Ferry Building. The bronze door signed Robert Ingersoll Aitken is perhaps the most photographed art piece at the cemetery and is featured on the front and back cover jacket of our pictorial history Cypress Lawn: Guardians of California Heritage. 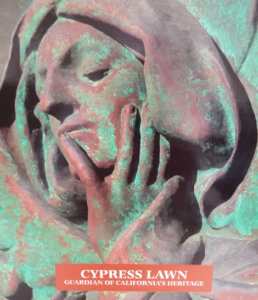 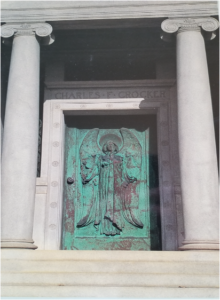 The native San Francisco sculptor did many notable public works across the U.S. and made significant contributions to the San Francisco-hosted Panama-Pacific International Exposition of 1915.

This mausoleum is an example of the “formula” that made Cypress Lawn a veritable outdoor museum: a wealthy patron hires the finest architects, sculptors, and stained-glass makers to create a family tribute. There are 87 of these private structures at Cypress Lawn — a display of some of the finest turn-of-the-century art in America.

The Crocker mausoleum houses nine members of the extended Charles Frederick Crocker family, including his wife and four children.

Charles is laid to rest within Section I of our East Campus. Click here to view an interactive map of our Memorial Park.