“Mission Revival” was an architectural movement that sought to revive and reinterpret the “colonial-style” Spanish missions built in California during the late 18th and early 19th centuries. It is sometimes termed “California Mission Revival.”

The easily recognizable genre enjoyed its greatest popularity between 1890 and 1915, particularly in schools, railroad depots, and cemeteries.

The 1892-dated Cypress Lawn granite entry gate is a classic example built by Barnett McDougall & Son of San Francisco at a cost of $300,000 in today’s dollars.

It was the first structure at Cypress Lawn and a popular stop for both visitors and funerals on the Southern Pacific Railway line. 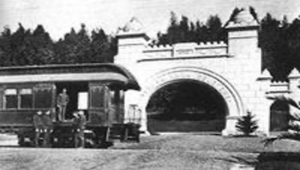