As the founder of Cypress Lawn Cemetery was fond of saying: “I knew nothing about the business, and therefore, had no false ideas to overcome.”

Hamden Holmes Noble did know something about entrepreneurial fortune building. After serving in the Civil War, he headed to California. As a member of the San Francisco Mining Exchange, Noble handled transactions for the silver Comstock Lode millionaires while investing in hydroelectricity and launching a power company that ultimately became part of Pacific Gas & Electric.

The inspiration for Cypress Lawn came during a carriage ride past San Francisco’s Laurel Hill Cemetery, which in just a few decades, had gone from civic pride to civic eyesore. San Francisco’s land-hungry residents — confined to a cramped 49-square-mile limit — quickly turned inhospitable to cemeteries. A friend of Noble’s who was riding in the carriage urged him to go into the funeral business and find a solution to the problem, which would have to be outside the city limits.

Noble’s visionary idea was to develop a “garden-style” cemetery like those that revolutionized the industry on the East Coast. He traveled to the “mother” of the movement, Mt. Auburn in Cambridge, MA, for inspiration and advice.

The result is what you see today, which has hardly changed since the 1892 founding: a pastoral and carefully cultivated Arboretum with winding roads and open spaces — a well-planned “public park” inviting visitors to stroll and meditate.

In the 1920s, Noble excavated five lakes that today consist of two large ones populated by coy fish and an array of birds. The environs are a haven for the departed that beckons the community and celebrates life. 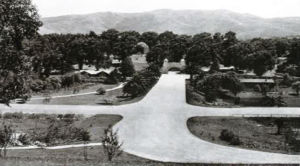 Quickly, Cypress Lawn became — and still is — the cemetery for the most prominent and powerful families in San Francisco and California. Magnificent monuments and edifices to memorialize the achievement of the men and women who helped shape the Golden State were built by the leading architects, sculptors, and stained-glass artists of the early 20th century. In fact, it been commented that Cypress Lawn’s outdoor and indoor collection has more elegant works of art than many museums. The cemetery, perhaps as no other single place, represents the political, economic, and cultural history of the American West.

Noble and his wife, Grace (1848-1917), are buried in an unostentatious granite-topped underground vault. Why not a more opulent tomb? Perhaps because all such memorials at Cypress Lawn were, in a way, his memorials as well. Noble did not need to proclaim his life and work. It was there, all around, for the world to appreciate. 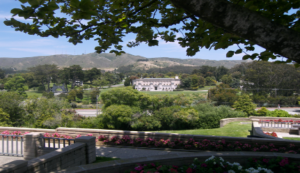 Noble is laid to rest within Section I, Lot 24. Click here to view an interactive map of our Memorial Park.