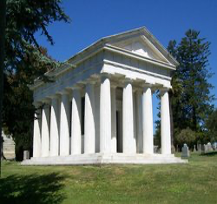 This Greek-inspired Doric mausoleum is a small replica of the grandiose ancient Temple of Poseidon. It was erected for Herman Nager, the so-called “King of Bluebird Potato Chips.”

The mausoleum was executed by architect Bernard Cahill, who also designed the nearby Lakeside Columbarium and the grand public mausoleum on the West Campus. The marble structure was completed in 1917 and was occupied by four family members before Nager’s death 29 years after its construction.

It is one of two Cypress Lawn mausoleums that bear no exterior family name. The other is the Hearst mausoleum, which was built by the father of William Randolph Hearst. There is a story that Nager was emulating Hearst in this regard.

This mausoleum is located at Cypress Lawn within Section B, Lot 15. Click here to view an interactive map of our Memorial Park.