Jennie Roosevelt Pool was a cousin of President Teddy Roosevelt and the widow of I. Lawrence Pool, a nephew of William I. Kip – the first Episcopal Bishop of California. Kip is buried in Cypress Lawn at the dedicated Episcopal area of Cypress Lawn.

When I. Lawrence Pool died, his body was shipped east for burial in the family’s New York vault. Jennie died in New York, but regarded San Francisco as her home, and left instructions for her remains to be returned for burial at Cypress Lawn. 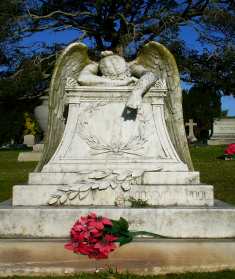 Her sister, Katherine Babcock, chose a magnificent and poignant seven-ton Carrera marble statue for her memorial. It was a 1911 reproduction by Antonio Bernieri of the “Angel of Grief Over the Dismantled Altar of Life,” located in the Protestant Cemetery of Rome, created by sculptor William Wetmore Story in memory of his wife. Story died in 1895.

Babcock was not the first to be so inspired. In 1901, Jane Stanford commissioned Bernieri to create a replica in memory of her brother, which can be seen on the Stanford University campus today. There are two other known reproductions of the sculptor in U.S. — at Metairie Cemetery in New Orleans, which survived Hurricane Katrina, and in Hingham, MA.

Jennie Pool Roosevelt left virtually all her estate ($8 million in today’s dollars) to sister Katherine Babcock while cutting her other sister entirely from the will.

Jennie Pool Roosevelt is laid to rest at Cypress Lawn within Section I, Lot 7. Click here to view an interactive map of our Memorial Park.