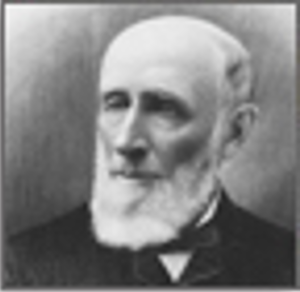 John Barton emigrated from Massachusetts to the gold fields of California in 1849, making him an original “pioneer of ‘49.”

He spent a couple of months panning for gold before opening an auction house in Sacramento. By 1869, he began to manufacture salt by solar evaporation in Alameda County. Before Barton and his Union Pacific Salt Company, salt manufacturing on the Bay had been mom-and-pop operations. While there were 17 salt producers in 1868, total production was only 17,000 tons a year. The Union Pacific Salt Company quickly became the biggest, employing more than 80 men. By 1885, Barton was producing 20,000 tons of salt a year. Its closest competitors were producing 5,000 tons a year.

Barton’s salt was heralded as the best in the area, and many claimed that it rivaled French salt made on the shores of the Mediterranean. His salt was used in curing meats, in acid soaps and glass works, in pottery, and in the reduction of ores.

The “Salt King” was a founding member of the Fireman’s Fund Insurance Company and sat on its original board of directors as well as serving as president of the Alameda City Board of Education for many years. Barton secured the original franchise for the Sutter Street Railway, a cable car company.

His memorial marble angel stands 6 feet high with a wingspan between 4 and 5 feet. 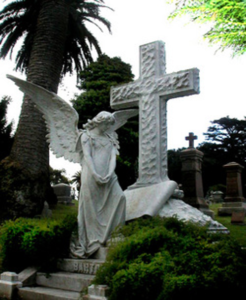 Barton is laid to rest within Section C, Lot 15. Click here to view an interactive map of our Memorial Park.