The young lawyer worked for the Antitrust Division of the Justice Department in the 1940s and then for the Board of Economic Warfare. He returned to San Francisco after World War II to launch an antitrust practice, representing Walt Disney and Samuel Goldwyn, among others. Joe Alioto became a millionaire.

He was inaugurated as mayor of San Francisco in 1968 and handily won another term in 1971. Alioto put his energy behind the development of three major building projects: the Bay Area Rapid Transit System (BART), the Transamerica Pyramid, and the Embarcadero Center.

Alioto delivered the nomination speech for Hubert Humphrey at the 1968 Democratic National Convention. There were rumors that Alioto would be selected as his running mate, but Humphrey tapped Sen. Edmund Muskie. 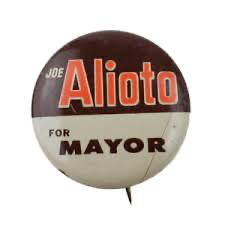 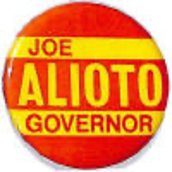 Alioto had five sons and a daughter with his first wife and a son and daughter with his second wife. His daughter, Angela Alioto, was a member of the Board of Supervisors for nine years and its president for two years during that tenure. She ran unsuccessfully for mayor on three occasions.