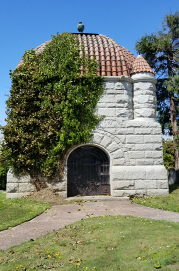 A columbarium is a structure that only holds cremated remains. This original columbarium at Cypress Lawn was the first in the United States to be built inside cemetery grounds.

An earthquake in 1957 compromised the structure. Some remains had to be removed and placed elsewhere, and no additional inurnments can occur there at this time. The columbarium is closed to the public, but you can look inside at the mosaic floor inscribed “Disturb Not the Remains of the Dead” and a spiral staircase leading to a second level.

Click here to view an interactive map of our Memorial Park.