Paul Y. Construction was one of the most successful Chinese-owned construction firms in post-war Hong Kong. Paul Yung Tso completed major infrastructure projects there and in Singapore from the 1950s through to the 1980s, including the American consulate building in Hong Kong and the 26-story Hong Kong Hilton, one of the largest hotels in the Far East at the time. The enterprise started in Shanghai in 1946 but relocated to Hong Kong after the Communist revolution in China. Although it is no longer under family control, the company continues to prosper.

Two marble dog-lions, or foo dogs, guard the Buddhist mausoleum of Paul Yung Tso. These mythological animals are often placed as protectors of Chinese gravesites. The male is identified by a ball under the right signifying the universe, and the female by a pup beneath her left paw signifying regeneration. Like lions and sphinxes, foo dogs always appear in pairs, and for the Chinese, also represent the opposing forces of Yin (female) and Yang (male). The statuary positioning and other elements are part of the Feng Shui of the Tso site, an art based on the belief that a harmonious relationship between our environment and nature’s forces affects disposition and luck. 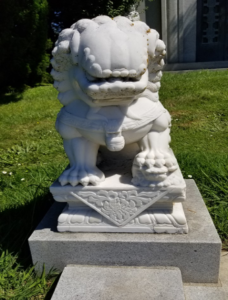 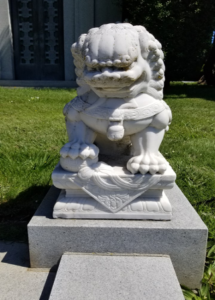 Tso is laid to rest within Section I, Lot 201 at Cypress Lawn. Click here to view an interactive map of our Memorial Park.