He was in on the ground soil. Thomas Larkin arrives in Northern California in 1832 and immediately begins to make money in Monterey. In cooperation with the ruling Mexican government, which he always carefully cultivates, Larkin is in the center of the lucrative import/export business at that major port. He is the right man, in the right place, at the right time. Fame, fortune, and power follow. 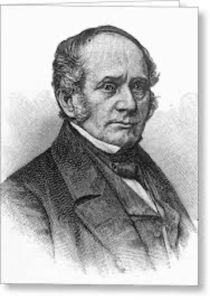 In his unique position as one of the few Americans with substantial political contacts in the government of Alta California – Mexican territory that comprises all of present-day California and large sections of what will be six U.S. western states – Larkin becomes a confidant and agent for the White House. President James Tyler appoints him as the first (and last) American consul to Alta California. After the Mexican War, which brings all of Alta California to the victorious United States, Larkin establishes a community along the Carquinez Strait that will be called Benicia, but he is drawn to San Francisco for the Gold Rush business opportunities. It is as a representative from the city that he serves at the 1849 Constitution Convention, which officially applies for California statehood. It is granted in 1850.

Larkin acquires several old Spanish land grants and is a master of land speculation. In the 1850s, he is reputed to be the richest man in America. 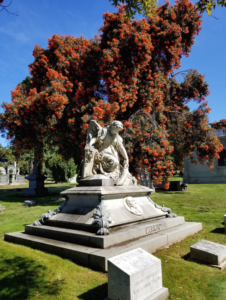 The imposing marble and granite Larkin monument was moved from Laurel Hill Cemetery in San Francisco. This massive angel, bending forward and looking down sadly at a cameo of Larkin, was carved by notable sculptor Rupert Schmid from a nineteen-ton block of the finest Italian marble.

• Larkin is called the “Father of Monterey and Benicia.”

• Larkin Street in San Francisco is named in his honor.

• In 1835, he built the first two-story house in California. Larkin House survives and is part of the Monterey State Historic Park. He also constructed the first wharf in Monterey.

• Larkin’s grandfather provided the horse for Paul Revere on his legendry Midnight Ride to warn American militias of the impending British attack that started the War of Independence.

Thomas Larkin is laid to rest within Section L of our East Campus. Click here to view an interactive map of our Memorial Park