A true ‘49er — one who set foot on San Francisco soil in 1849 — Capt. William H. Kohl was a shipbuilder who also commanded his own vessel. He made an immense fortune in the Alaskan fur seal trade.

The grand mausoleum constructed in 1893 was the first at Cypress Lawn. The nearby Andrew Jackson Pope mausoleum preceded it by a year, but it had been in San Francisco’s Laurel Hill Cemetery since 1878 and was later moved to Cypress Lawn.

Kohl hired prominent stained-glass artist Louis Comfort Tiffany to create a large window in his memorial, which can be viewed by looking through the door. And notice that magnificent portal. Like all private mausoleum doors at Cypress Lawn, it is a cast bronze one-of-a-kind piece.

The sprawling Kohl estate in San Mateo, landscaped by John McLaren before he became the superintendent of Golden Gate Park, was donated to the city of San Mateo and is now Central Park, which hosts the San Mateo Arboretum.

Perhaps better known than his father, but for tragically different reasons, Frederick Kohl was at his best spending the family money, most notably in building a grandiose estate in Burlingame called “The Oaks.” The 63-room mansion with tennis courts, rose gardens, a large carriage house, and a 150,000-gallon reservoir became the backdrop for lavish entertainment of dignitaries and the San Mateo Peninsula elite.

The fate of that notable mansion is a circuitous and bizarre tale. It begins when one Adele Verge was hired to work as a “lady’s maid” for Frederick’s mother. Bad blood soon developed between the French employee and Frederick. When he had Adele arrested for erratic and threatening behavior, she sued him. Leaving a San Francisco court after losing her case, Adele shot Frederick as he emerged from the elevator. The bullet lodged in his chest, too close to his heart to risk surgery. He recovered, but the wound caused great physical and mental suffering for the rest of his life. 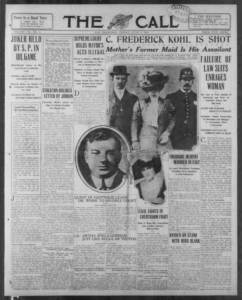 Although she was eventually deported to France after a stint in an “insane asylum,” Adele publicly vowed to get revenge. Frederick was forever haunted by the fear that an unhinged Adele would return and hunt him down. His marriage suffered, and after a permanent separation from his wife, Frederick abandoned the “The Oaks” mansion to live at the St. Francis Hotel in San Francisco. Then came rumors that Adele had been released from a French asylum. Suffering a stroke, Frederick and his mistress escaped to the Del Monte Lodge on the Monterey Peninsula. It was there where his convalescence seemed to be going well. Yet, a scant one month later, Frederick shot himself to death.

The mistress inherited the mansion but had no interest in living there. She quickly sold it in 1921 to the Sisters of Mercy, who used the facility as a convent for 10 years and later converted it to the present-day Mercy High School. Since 1982, the school has opened the grounds and parts of the mansion to the public, offering rental accommodations for parties, weddings, and celebrations.

Click here to view an interactive map of our Memorial Park.