Lefty O’Doul is a San Francisco native. His unique memorial continues to be one of the most popular attractions at Cypress Lawn. 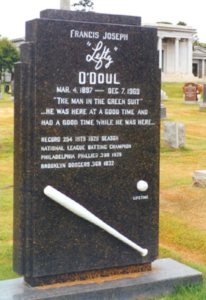 He played for all three New York City major league teams — the Yankees, the Dodgers, and the Giants — compiling an amazing .349 career batting average in 970 games over 11 seasons. He began as a pitcher and didn’t become a hitter until age 31. Lefty has the highest lifetime batting average of anyone eligible for the Hall of Fame but not enshrined. Never elected to the Hall of Fame?! His career as a full-time hitter is regarded as too short. Change the rules! 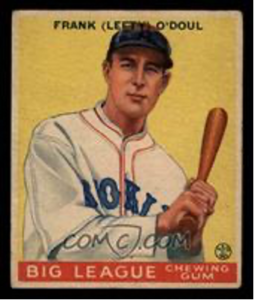 He did make it to the Japanese Hall of Fame. O’Doul was instrumental in spreading baseball’s popularity in Japan during some 30 trips there before and after World War II when he served as the sport’s official U.S. goodwill ambassador. He named the “Tokyo Giants” in 1935 in honor of his long association with the New York Giants. 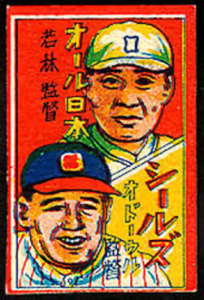 Lefty returned to his hometown to manage the San Francisco Seals of the Pacific Coast League from 1935 to 1951, racking up the most managerial wins in PCL history. One of his protégées was a young Joe DiMaggio. When asked what role he had in developing the “Yankee Clipper,” O’Doul remarked: “I was smart enough to leave him alone.” DiMaggio, another San Francisco native, is buried at Holy Cross Cemetery next door to Cypress Lawn.

The O’Doul legacy lived on for many years in the Union Square tavern he founded. 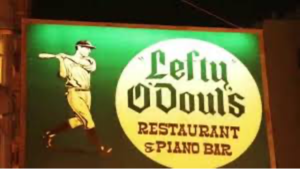 It was moved and reimaged in 2017 as a family restaurant in Fisherman’s Wharf. Another landmark is adjacent to the San Francisco Giants ballpark. 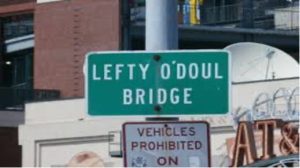 Lefty is laid to rest within Section I of our East Campus. Click here to view an interactive map of our Memorial Park.