The “Wheat King” was the largest California exporter of the commodity in the late nineteenth century, building a milling and warehouse empire in the process. The business assumed bonanza proportions and brought great wealth to the family. George McNear shipped grain from Vallejo, Crockett, Benicia, Oakland, and San Francisco. But the town of Port Costa, built on the Carquinez Straits (1879) was the principal wheat exporting spot on the Pacific Coast and became a hub of an international network extending to England, Europe, Australia and Asia.

George W. NcNear Dies at Age of 72 After a Long Illness

His son, George Washington McNear, Jr. assumed presidency of the firm upon his father’s death, and under his leadership the company broadened both its products, most particularly oil, and global reach. The firm also owned large water, land, and business interests in Contra Costa. 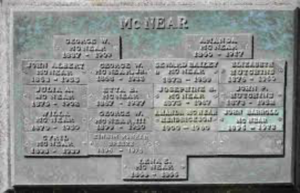 George McNear is laid to rest within Section L of our East Campus. Click here to view an interactive map of our Memorial Park.