As a partner in the powerful Alaska Commercial Company, this Finnish-born sea captain who came from humble origins was a major player in opening the resource-rich Alaskan Territory by establishing stable trade links to the U.S. By 1902, he was president of the San Francisco-based enterprise, and had made a fortune, largely by supplying seal pelts.

Some of his German partners had seen the potential for planting wine grapes in the fertile Napa Valley since the 1860s. Niebaum and his wife purchased 450 acres on prime land in 1879 and began making their own wine, establishing Inglenook in Rutherford, California, a small village in Napa Valley.

From the beginning, Inglenook was Niebaum’s pride and joy as he experimented to create quality wines, taking frequent trips to Europe to observe vineyards and winery practices, importing a wide variety of European vines, and following high standards in winemaking. He was the only Napa vintner of his time to bottle the wines on his estate. Inglenook became world-renowned, winning gold medals in the World’s Fair of Paris in 1889 and maintaining their reputation for high quality through the decades into the 1915 Panama-Pacific International Exhibition in San Francisco where Inglenook wines captured 19 gold medals, far surpassing any other California winery. 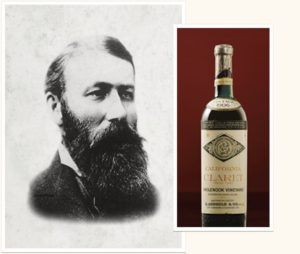 The winery remained in family control until 1964 when, in the words of one historian, it was “tragically sold to corporate interests.”

Gustave is laid to rest within Section L of our East Campus. Click here to view an interactive map of our Memorial Park.