Arriving in San Francisco in July 1850 after a six-month sea journey from Massachusetts, 25-year-old auctioneer Henry Mayo Newhall established a flourishing auction house as well as an import/export business.

With a keen entrepreneurial eye, Newhall used money from the sale of his import/export business to plunge into fledging railroad enterprises that sought to connect San Francisco to other new cities in the West. By the time he was forty, Newhall was the President of the San Francisco San Jose Railroad Company. Eventually, he sold his railroad interests to the new Southern Pacific Line where he stayed on and served as Director. 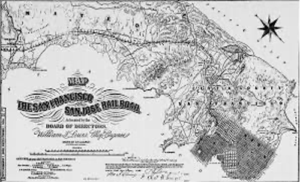 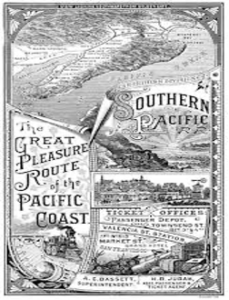 Turning his interest to real estate, between 1871 and 1875, Newhall purchased 143,000 acres in California, stretching from Monterey County in Central California to Ventura County in the South.

He had a master plan: deed the right of way to the Southern Pacific for new tracks and “whistle” stops, thus ensuring that residents and businesses would populate the area, making his real estate much more valuable. The initial line connecting the San Francisco Bay area with Los Angeles was laid across his land. He named one whistle-stop Saugus after his birthplace in Massachusetts. Soon, Southern Pacific designed a town nearby and called it Newhall. Today, they are thriving communities with populations of about 50,000 each.

Henry Newhall’s next adventure was to establish ranching and farming empires on his land, producing a wide variety of crops from corn and alfalfa to sugar cane and citrus fruits, as well as his staple – wheat. 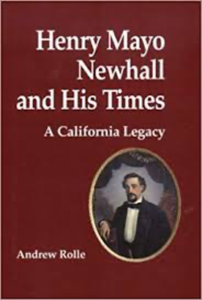 Henry Newhall’s rags-to-riches story is typical of many of the wealthiest California business pioneers resting at Cypress Lawn. They started with very little, but in a course of a lifetime built great empires, and in the end, great mausoleums and memorials. It is the American Dream writ large.

• Scott Newall, great grandson of the pioneer family, became executive editor of the San Francisco Chronicle in 1952 and served in that capacity until 1971.

• When Newhall died in a horse-riding accident in 1882, his family, instead of splitting their inheritance, joined forces to incorporate as the Newhall Land and Farming Company, also known as Newhall Ranch. In 1965, the family sold a right of way to the State of California for Highway 5 and then hired urban designers to develop a part of the land in Los Angeles County as a planned community. Thus, Valencia was born. The town of 65,000 is best known for its oranges and the location of Six Flags Magic Mountain amusement park.

Henry Newhall is located within Section I, Lot 347 of our East Campus. Click here to view an interactive map of our Memorial Park.