James Flood’s dominating 28-column family mausoleum perched on its own grassy island is the largest on our grounds. The ornate interior is of white marble. Originally erected in Calvary Cemetery in San Francisco, the structure was moved to Cypress Lawn at the behest its founder, Hamden Noble, a Flood financial advisor and friend. It was not the only mausoleum to be relocated to Cypress Lawn from San Francisco. At the turn of the century, political pressure is mounting on San Francisco’s cemeteries to leave the city limits in order to use that land for residential and commercial development. Moreover, those cemetery properties were deteriorating, and some families chose to move their loved ones before they were evicted. (The eviction order came in 1913 but it will take over twenty years to fully enforce). Colma’s many burial grounds, which began proliferating in the 1890s, were a direct response to that situation. In 1892, Cypress Lawn became the third cemetery to open in the farmlands just south of San Francisco, protected from the zoning laws of the metropolis. 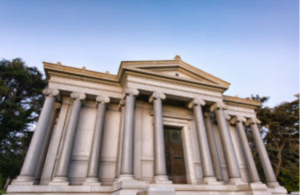 By early and shrewd investments in silver mine stocks, Flood amassed great power and wealth, becoming the King of the Nevada Comstock Lode “Silver Kings.” He established the powerful Bank of Nevada in 1875, forerunner to the present-day Wells Fargo Bank. The man who came from modest means earned over $70 million a year in today’s value during that business heyday. His many investments in San Francisco were a major factor in the dazzling post-Gold Rush cityscape. The Flood Building on Market and Fifth was erected by James Flood’s son in his honor. His great grandson, James C. Flood, sat on the Cypress Lawn Board of Directors for 31 years until his death in 2020. 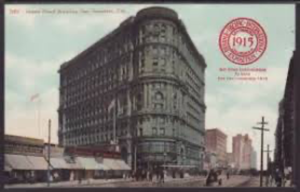 The Silver King loved grandiose structures. He became one of the first to build a castle-like mansion on top of Nob Hill. Occupying an entire city block, the literary elite of San Francisco ridiculed it as pretentious and imprudent. It was the only Nob Hill mansion to survive the Great Earthquake of 1906. Today, the Pacific Union Club calls the National Historic Landmark home.

James Flood is laid to rest within Triangle B of our East Campus. Click here to view an interactive map of our Memorial Park.