The Noble Chapel you behold today is a 2016 restoration of the original 1893 structure.

This restoration was painstakingly pursued in order to return as closely as possible to the appearance and specifications of the original structure. The project cost $5 million, took almost two years, and utilized supplies from some of the same companies that contributed to the 1893 building. The chapel features a 6-foot by 12-foot Gothic arch stained-glass window highlighted with medallions and a floral design.

The initial building was designed by notable San Francisco architect Thomas Patterson Ross, who patterned the chapel after St. Giles Church in Stoke Poges, England — the site where Thomas Gray wrote his famous 1751 poem, “Elegy Written in a Country Churchyard.” 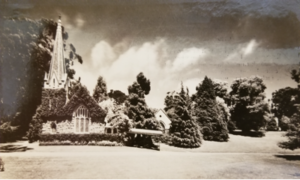 The chapel was the first in Northern California to have a mortuary receiving vault and chapel together. Also situated on the grounds were the first crematory and the first columbarium. This combination of services, which made it possible for a cremation and a memorial service to occur seamlessly at one location, turned the chapel into the most popular funeral venue in the Bay Area. A crematory and service area were adjoined to Noble Chapel in 1937. In the recent renovation, the crematory was completely restored and furnished with the latest state-of-the-equipment.

Today, the chapel holds 60-plus people and is available for memorial services, as well as weddings and other appropriate functions. 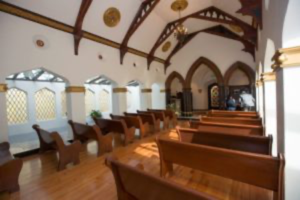