Memorials for pets are at least as poignant and sentimental as those for humans, which we will soon see.

But first, many want to know if your pet can be buried with you. The answer depends on what state you are in and on the meaning of “with.”

Most states either have laws specifically prohibiting pets and humans to be buried together or are silent on the issue. But at least four states have laws allowing some form of combined burial.

New York and New Jersey allow cremated human remains to be buried with a pet, but only in a pet cemetery. New York’s pet cemeteries cannot charge a fee for the service and are barred from advertising that they offer it. Pennsylvania allows cemeteries to have three sections – one for humans, one for pets and an area for both.

Virginia permits cemeteries to have clearly marked sections where pets and humans may be buried alongside one another. However, the pet must have been a companion animal under Virginia law and must have its own casket.

Colma has one pet cemetery, a close neighbor of Cypress Lawn.

Here are some of its residents. 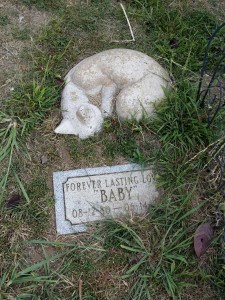