The secluded spot at Lake Merced is a California Registered Historical Landmark. 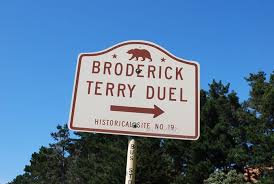 Our combatants in 1859 were no less than a U. S. Senator from California and the former Chief Justice of the California Supreme Court. Dueling was technically against the law but it was an age when honor trumped the law. Their first attempt was stopped by police intervention. 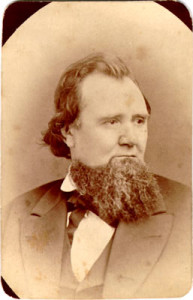 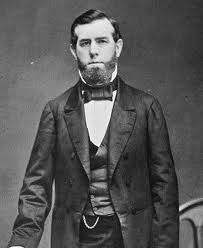 The two were former friends and political allies, which made the falling out more dramatic and emotional. The final fighting words were uttered by Senator David Broderick who called David Terry “a damned miserable ingrate.” For men of honor, this was like a public stick in the eye. Terry demanded a public retraction—-code words to settle the affair on the bloody field of honor. The conflict of words had spun out of control, and fate now guided the men’s destiny.

The mutually agreed upon weapon of choice was a Belgian .58 caliber pistol. Terry was already familiar with that model and practiced before the duel. He also had more experienced seconds. The men stood a mere 10 feet apart. One observer described Broderick’s movements as awkward as they were brave: “He seemed the impersonation of that order of courage which faces death without terror, which prefers doom to the reproach of of fear.”  As Broderick fell to the ground, mortally wounded, and in a moment of high drama worthy of a Hollywood script, a friend charged at Terry with a pistol, but was stopped.

When the San Francisco Sheriff tried to serve a murder warrant, the posse retreated in face of a shotgun-wielding Terry, but he agreed to surrender in Oakland three days hence. He was eventually released without charges.

Although men would still defend personal honor with bloody public contests, that incident presaged the end of such practices, and is widely regarded as the last great duel in American history.

~Broderick was anti-slavery; Terry supported the South. Many, including Broderick, believed that this was the unspoken reason behind the political split and eventually the duel. The former Senator (he had lost his reelection bid just before the event) was hailed as an anti-slavery and anti-corruption martyr at his funeral in one of the most prominent displays of public support The City had ever witnessed.

~Broderick was buried in Lone Mountain Cemetery. In 1940, after years of wrangling, San Francisco removed all of the cemetery remains in The City, most of which were transferred to Cypress Lawn Cemetery, where they eventually were laid to rest individually but without personal monuments in an area named Pioneer Mound. Broderick is among some 35,000 souls who were unclaimed by family or friends for private burial. 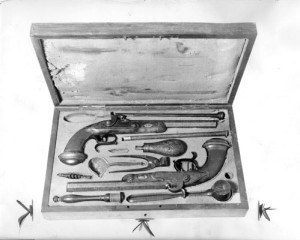