A Most Dangerous Profession in Gold Rush San Francisco 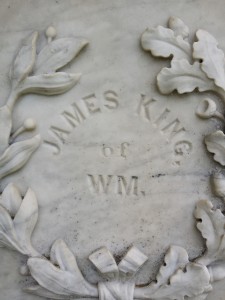 At rest in Cypress Lawn

On October 8, 1855, the first edition of the Daily Evening Bulletin appeared, edited by James King of William, a member of the 1851 Committee of Vigilance. In the words of a contemporary historian, he “used his paper to crusade fanatically against immorality and corruption and his reputation of unimpeachable integrity as well as his blistering and frequently scurrilous editorials to turn on unscrupulous characters.” Hard to buy life insurance with that on your resume.

King and James P. Casey, the editor of The Sunday Times and a member of the county Board of Supervisors, carried on a nasty feud through their newspapers, which became highly personal. On May 4, 1856, King’s Bulletin reproduced articles from New York newspapers showing that Casey had served a term in New York State’s Sing Sing prison for grand larceny.

At about 5 p.m. on May 14, 1856, Casey accosted King in the middle of Montgomery Street at Washington Street, asking: “Are you armed?” and then aiming a Navy revolver at the editor, he demanded that King “draw and defend yourself.” At the same time Casey fired one shot, the bullet striking King in the left chest near the armpit. King died on May 20 at the age of thirty-four. 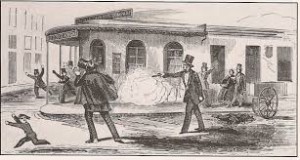 In hours, some ten thousand people crowded around the Montgomery Block and a buzz went through the crowd that another Committee of Vigilance was forming. Those Vigilantes, who soon swelled to over two thousand, gave Casey a hearing, pronounced his guilt, and hanged him on May 22, 1856, the day of King’s funeral. Not to waste an extravagant lynching ceremony, one Charles Cora was executed along side Casey for the murder of General William Richardson. Political power in San Francisco was  transferred to a new political group established by the Vigilantes, the People’s Party, which ruled until 1867.

After a church funeral service on May 22, a throng of mourners formed on Stockton Street to accompany King’s remains to the Lone Mountain Cemetery. They formed a cortege a mile long, marching four abreast and according to a bystander, “presenting a spectacle never before witnessed in San Francisco.” King was eventually moved to Cypress Lawn when Lone Mountain Cemetery closed.

Twenty-four years later, in 1880, Charles de Young, co-editor with his brother Michael of the Daily Morning Chronicle, was assassinated in his office. His memorial is at Cypress Lawn. 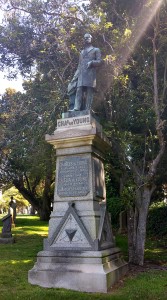