All Aboard! Getting to Cypress Lawn in Style Back in the Good Old Days

Holy Cross Cemetery opened in Colma in 1887, followed by the Jewish Homes of Peace/Hills of Eternity two years later, and then Cypress Lawn, the first non-sectarian Colma cemetery in 1892. Carriage rides along unpaved roads from San Francisco to the burgeoning necropolis were challenging and took at least two hours, often more. Such travel during the rainy season was downright inhospitable. 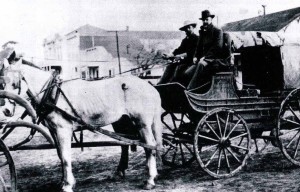 However, funeral parties could easily reach the cemeteries via the South Pacific Railroad mainline, which in the 1890s traveled through Colma on its way to other destinations. There were two scheduled funeral trains daily. Caskets were carried in baggage cars for $1.  Mourners made the trip for 50 cents per person. The most popular accommodation for groups of twenty or more was via the Southern Pacific’s El Descanso or Greenwood, both magnificently appointed funeral parlor cars including draperies, plush carpeting, wicker furnishing, and separate “apartments” for men and women. Groups desiring greater flexibility could charter an entire train for $50 in addition to the regular mourner and casket charges.

Right before the opening of Cypress Lawn came the inauguration of the San Francisco & San Mateo Railway electric trolly line that serviced Colma cemeteries from downtown San Francisco every fifteen minutes. The company offered a handsomely equipped funeral car with special compartments for the casket (not shoved unceremoniously in the baggage car), the immediate family, and other mourners. Caskets cost $10 while mourners traveled for the normal ten-cent fare.