The Most Potent Cocktail at Cypress Lawn 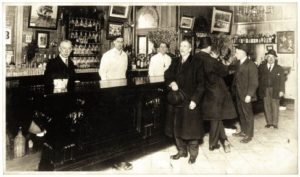 Widely served during the Gold Rush years and long thereafter, Pisco Punch was so potent that one writer of the day remarked that “it tastes like lemonade but comes back with the kick of a roped steer.” Others said “it makes a gnat fight an elephant.” 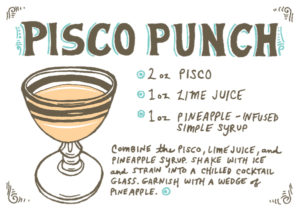 Pisco is a late 16th century brandy made from Peruvian grapes and was available in San Francisco since the 1830s when it was first brought  via ship by rawhide and tallow traders. The grape varietals thrive in one of five growing regions in 42 different valleys. Pisco was the first distilled spirit made in the new world. As there were no glass bottles in the 16th century, the brandy was shipped in ceramic (clay) containers sealed with beeswax.

When the Bank Exchange & Billiard Saloon opened its San Francisco doors in 1853 it served Pisco among other several liquors. Several punches were made using Pisco at the Bank Exchange over a long succession of owners, ending in 1893 with Duncan Nicol. He was the last proprietor when it closed its doors permanently in 1919 because of Prohibition. The mixologist is at rest at Cypress Lawn. 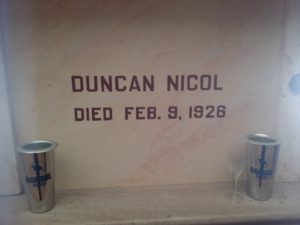 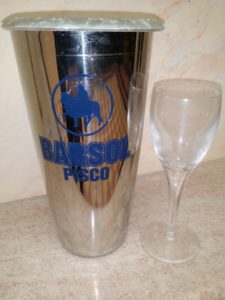 Duncan Nicol invented a Pisco Punch recipe using pisco brandy, pineapple, lime juice, sugar, gum arabic and distilled water. His was so potent it was said that a patron would be ordered to walk around the block before being served a second. A third, and it was unlikely he could walk. 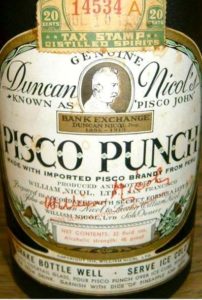 Pisco Punch gained fame worldwide thanks to pieces written by travelers including Mark Twain and Harold Ross (founder of New Yorker Magazine). In Rudyard Kipling’s 1889 epic From Sea to Sea, he immortalized Pisco Punch as being “compounded of the shavings of cherub’s wings, the glory of a tropical dawn, the red clouds of sunset and the fragments of lost epics by dead masters.”

The drink has undergone a resurgence in recent years. Read more about it. 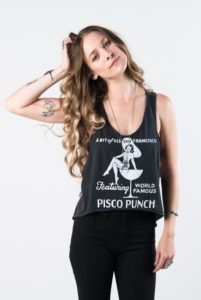